Interview With Band Is Included Below! 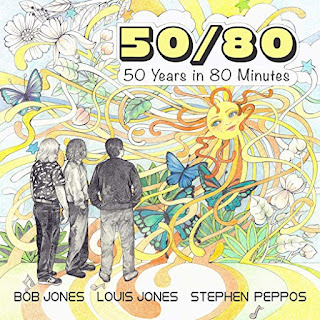 How does a group of musicians put 50 years of music into a single CD that lasts for 80 minutes? Just ask Bob Jones, Louis Jones, and Stephen Peppos. The title 50/80 50 Years in 80 Minutes lets you know straight away what you are in for.

On a separate note, I have covered several of Stephen’s New Age keyboard instrumental projects over the years and consider him to be one of the finest performers of instrumental music that I have heard.

This all started in the 60s when three boys in High School put a band together and then started writing and recording. One of the configurations was Stephen Peppos & Jones Straightjacket Band (tracks 1, 3, 8, 9, 12, 14, 19, 22, 24). There are extensive liner notes included with the CD so you get the whole story.

The 25 tracks cover a range of pop and rock that are indeed retro and if you listen intently you can identify which decade that they fit into. For instance, “High School Years #2” sounds very 60s and “Too Much To Bear” has some good guitar licks that reminded me of the late 70s to early 80s period. Then “Lalena” has a psychedelic trippy 60s Top 40 sensibility. These songs sound good enough to have been spinning regularly on radio stations and in fact, some did on a local level with station WKLX out of Virginia. “I Gotta Sing My Song” was one song that radio DJ Mike Deeson liked. To me, it felt like something that would have gone well with 70s TV shows like Love Boat or the Mary Tyler Moore Show. Only those old enough to remember will understand where I coming from once, they hear the tracks.

One of the tracks on solid ground that is good for any era is ”A Christmas Carol.” It features great vocals and some jangly acoustic guitar lines. Seasonal music does not define a period so when you first hear it, it fits no matter what.

As you make your way through this ambitious compilation, you realize why it took 2 years to get it all together. The variety is quite interesting. Form a Christmas song to the lyrics “Hell no we will not fade away” on “Boomers Anthem,” which is a recent recording from 2019, is accompanied by appropriate guitar lines and inspirational lyrics for all the rockers out there. For me that was one of the standout tracks and my favorite on the entire recording.

Influences from the Byrds To Paul Simon to Cream pepper all of these recordings. You get the feeling of originality bursting through with authority to more obscure live recording snippets on “Look Through Any Window.” “Kicks” is all 60s and one of the best tracks on the CD. It was a hit in 1966 for Paul Revere and the Raiders. The fact that they covered it so well was an indication of their all-around talent.

At first glance when you see 25 tracks you may think “Wow this is a lot of music” and it is a double album. The truth is they go by very quickly because some are short snippets of recordings to go along with other full-length tracks that cover some ground musically.

When I heard the first few tracks, I was thinking that I was not too crazy about them, just my opinion, and it does not mean someone else would not like them. But it just keeps getting better and you realize the entire point of this compilation. That thought was fleeting and forgotten in a matter of minutes.

50/80 50 Years in 80 Minutes is jam-packed with musical diversity and a snapshot of history over a long period. This group of young men had the talent to record all this music and although they did not become stars on a national level, they certainly showed that their talent could have taken them places most bands dream of. It is a matter of being in the right place at the right time. All of that aside, this is a valid musical statement showcasing the talents of the three main men involved.