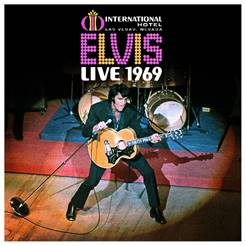 Elvis, Elvis, and more Elvis! Live 1969 is a comprehensive 11 CD set for the ultimate fan base that exists and is continually growing.

Live 1969 features the release of eleven complete sets from Elvis’ August 1969 engagement at Las Vegas’ International Hotel. Of these performances, four are being released in full for the first time. That fact alone should raise some eyebrows in the worldwide community of supporters of the King’s legacy.

This also marks the 50th anniversary of Elvis Presley’s return to the stage to perform after an eight-year absence fulfilling his movie obligations.  His Las Vegas residency at the International Hotel featured 57 sold-out shows and the live debut of his signature #1 hit “Suspicious Minds.” That track happens to be my personal all-time favorite as it captured the excellence of the band backing Elvis and his ability to command an audience and own the song. He also was able to cover other popular songs in his way giving an audience a complete view of his tremendous talents.

This deluxe package also includes a 52-page booklet with rare photos, memorabilia, and an oral history by Ken Sharp curated from historic interviews with Elvis, Colonel Tom Parker, Tom Jones, Jerry Schilling, James Burton, Cissy Houston, Terry Blackwood, George Klein, Fats Domino, etc. That is the icing on the cake for the live music fan and you have an opportunity to reap the benefits of first-hand discussions from his peers while taking in this massive collection.

I appreciate the music of Elvis Presley and to hear him come to life on this set gave me a new perspective of what a great performer he was. Even after being away for eight years he just picked up where he left off and thrilled every audience he performed for.

There is some repetition in this set but I think most people would expect that with this much music. He did have his act and storytelling that went into his set but you will get some different setlists to enjoy and a bird’s eye view of what it was like to be there interacting with him.

Live 1969 may very well be the ultimate live Elvis recording however I think you need to be a superfan to enjoy this to the fullest otherwise if you are a casual listener, that genuinely appreciated the artistry of The King, you would be well advised to listen to this over some time.