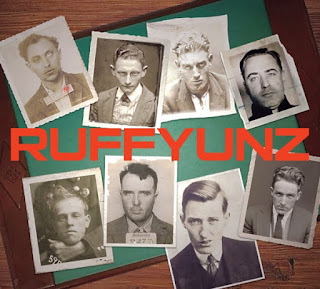 Featuring Pat Travers and members of The Plasmatics and Cactus!

RUFFYUNZ is a partnership between Randy Pratt (Cactus/The Lizards), Emmy winning engineer JZ Barrell, and singer Ed Terry and a collection of drum and guitar masters. Guest artists include guitar legend Pat Travers and drummer T.C. Tolliver from The Plasmatics. The songs are mainly about sex, animalistic sex, with a couple of “Dark Dread” numbers thrown in for bad measure.

The band's concept is to use “known” drummers and guitarists as guests on their records. Once the guest guitarist has done his or her thing, Jesse trades solos with them…and he really throws down the gauntlet, as he SHREDS!!

Says Randy, “The songs are written bass/drums first, creating a lot of grooves and BIG RIFFS. From decades of reading Bass Player magazine, it seems most song writing bassists don’t write on bass…so I hope that gives us a bit of a unique vibe….plus my ever growing collection of uncommon effect pedals, not intended for bass, influence the way I play and the stuff I come up with. After the sessions, my partner JZ Barrell arranges the music into more  defined song form. Usually, Ed Terry writes his vocals and lyrics, quickly, and records them at his home studio. Amazingly, it seems like we go with his first takes 90% of the time! Also, he writes most of his vocals to bass and drums, which is 'different', too, isn’t it? Josh and I produce the records. Then guitar is added to make the compositions come alive, searching for that sweet spot where James Brown and Black Sabbath collide.”

RUFFYUNZ next record is in the works now with and exciting new cast of guest players!