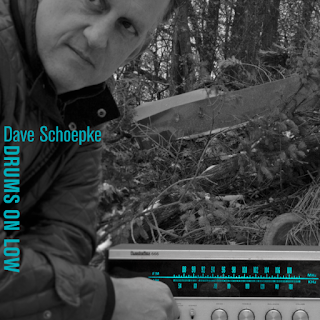 Drummer Dave Schoepke will be releasing his first solo drum album titled “Drums On Low” on July 15, 2019. Schoepke is an accomplished North American drummer, who has had the pleasure of working with the legendary Jethro Tull guitarist Martin Barre. Dave toured with Martin's band in 2017 and in 2018 for the “Cruise To The Edge” Tour. He's also been the primary drummer for The Willy Porter Band since 2002, and has loved every second of his time with the band. Dave has toured with Willy Porter on a number of occasions over the years, and has numerous television and radio appearances on his record. The amazing part is that Dave is able to do all of this, and still has time to devote to his own band Tweed. Tweed has been a mainstay touring in Europe for the last few years along with a number of other blues and soul groups.

Dave said this about “Drums On Low”: “The music and recording are a direct response to my life changes. Post the birth of my son I was inspired to craft and assemble this album. The concept is simple: to make an album in response to the overwhelming feelings I had about my family and where I was as a musician at this stage of my career. What flowed out was soaked with the spirit of love and harmony between our family unit and the reality that rhythms of life which bind us are always there in the ways we talk, feel, think, breathe and react to one another. I was motivated to write music that to me resonated those elements.”

The completion of this album was the realization of a dream of Dave's since age 16 to make music solely on drums and percussion instruments. Until now, that was an unattainable goal due to work demands, recording capabilities and costs. Written and recorded at Dave's home studio in the first 2 months after the birth of his 2nd child, this collection of pieces reflects the joy, wonder, and sleeplessness of being a new parent. The music was assembled in bits and pieces in between naptimes and family maintenance.

“My wife was very supportive in that when there was some free time, I was able to run downstairs and work on the music. Often, I began recording a piece only minutes after changing a diaper, feeding my son or some other family business. It was nearly impossible to separate the elements which is the biggest part of this whole story. The music is so directly informed by my day to day family life, and it's as much a reaction to those things as it is to my purely musical pursuits. At times I just sat down and the music flowed with no thought or preconceived ideas, nothing but reaction to life with my family. Ultimately the content on the album is 1/3 pre-formed pieces, 1/3 sketches that were embellished on and 1/3 full improvisations. I had the intention of having it all ready to go ahead of time, and a lot of things were finished, but when inspired I was able to turn on a dime and go with where the muse took me, which often happened in the midst of working on another piece. My overall goal with this album was to create a body of work that reflected where I had been as a musician but with the intent that the pieces come across as songs rather than solos. All of the music was recorded live with no overdubs, punch-ins, or edits/splicing on a combination of drum kits with varied tuning schemes.”

Some of the pieces are more melodically driven with the pitches, “Window, War Of The Grasshoppers, and Eleven Three” are examples of pieces that reflect that approach with mallets being the choice to draw the tones out. “Which One ARE You and N'ging” are informed with more traditional approaches and are considerably more aggressive. Some tracks are more experimental in form and approach, “Sound On Low” uses free spinning metal shakers on various snare drums and micro percussion alongside a detuned 26” kick drum, while “The Thing From The Darkness” is a flat out free expression coupled with audio from an old 1930's radio show.

“At times I wanted to abandon any concept of bars or strict form to the pieces, which I felt would restrict me and inhibit my transference of ideas. If I added a beat, dropped one, or the form floated away from my original intent, I went with it rather than be beholden to anything other than the moment. I wanted to disregard any of the common notions of form, tempo, tuning, and theory in favor of feel, attitude, flavor, vibe and excitement. There was no fixing or editing on anything, so if there are mistakes, odd sounds, and any quirkiness that didn’t take away from the flow and intent of the piece, I left it in and in turn feel it adds more human element to the production rather than an over polished product. All in all, 20 songs were recorded and 11 selected to represent where I was at that time. Because this was to be my first solo endeavor and one I longed to do since childhood, I felt like I had a lot to get out. Concurrently making this album has inspired me to work on building this facet of my career, as I have a slew of concepts and ideas I'd love to share.” 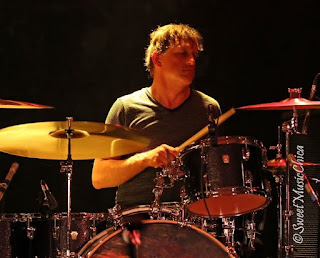 Watch the video for “Which One ARE You?”:


Dave said this about the video, “This is about an illustration of dualities in life. The two girls symbolize struggles that sometimes exist within people, good and bad, yin and yang, whatever. The music informs the manic-ness and chaos that can exist. I wanted to express chaos to the form of the song and do away with measures and structure at points, while returning to a rabid unrelenting ostinato that symbolizes the need to walk the line in life. The fight within people is often so much greater and out of control than we can comprehend. I learned this firsthand from a bi-polar suicidal father who took his own life when I was 10.”

When Dave is not touring with Martin Barre, touring Europe or holding down the drum throne for Willy Porter, he can be found in the studio recording. He is an extremely busy session musician with over 50 albums to his credit. These albums cut across all genres of music. He has also done dozens of instructional CD's for the Hal Leonard Corporation (One of the world's largest music publishers). Dave also heads up the improvisational recording project, Blank Radio, and is the chief engineer and curator of hundreds of sessions with musicians from all over the greater Milwaukee area, culminating 23 full length album releases since 2008. These albums feature improvisations in all styles from ambient soundscapes to classical, jazz, and seething progressive rock.

Currently Dave makes his home in Milwaukee and is a private lesson instructor at Cascio Interstate Music. He has done dozens of clinics and been billed with legendary drummers Ed Thigpen, Paul Wertico, Dom Famularo, Greg Bissonette, Ernie Adams, and Carmine Appice. He maintains a busy schedule of teaching, touring, clinics, and sessions, and is always striving to evolve in every facet of his music making. Dave proudly endorses Ludwig Drums and Paiste Cymbals and was named 2009 Wisconsin Area Music Industry (WAMI) drummer of the year. In support of the release of “Drums On Low,” Dave is booking shows for August/September 2019

In closing, Dave has this message to impart to his listeners, “Joy and exploration. To make music with joy in the heart devoid of the constraints and trappings of the business and analytical side of the music industry.”