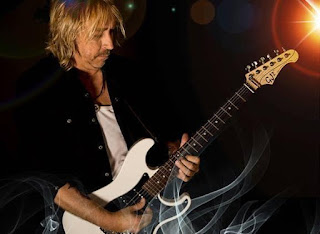 Los Angeles - Grammy winning guitar legend & Johnny Winter protege Paul Nelson will be touring the US in support of his critically acclaimed latest album “Badass Generation.” For Paul Nelson, a new musical chapter beckons... Nelson was not only the hand picked guitarist to legendary rock/blues icon Johnny Winter but is recognized in his own right as one of today’s top guitarists. “Johnny definitely took me under his wing,” Nelson remembers his late friend and mentor. “The blues world does that. One musician hands you the torch, and then you try to run with it. Johnny took pride in turning me on to the likes of Robert Johnson, T-Bone Walker, Muddy Waters Delta, Texas and Chicago blues – all the music that he loved. I knew what he was doing for me, and I am really appreciative for that.”

Worldwide touring has always been a constant in his career. Nelson and his time with Winter was no different, performing and/or recording along side an array of today's top artists such as: Slash, Vince Gill, Joe Walsh, Eric Clapton, Warren Haynes, Derek Trucks, Sonny Landreth, Edgar Winter, Billy Gibbons, Leslie West, Susan Tedeshi, Joe Bonamassa, Dr. John, Dickey Betts, Rick Derringer, Brian Setzer, Larry Carlton, Robben Ford and countless others. Major appearances such as television performances on “Late Night with David Letterman” and “Jimmy Kimmel Live” soon followed. This finally led Nelson to perform on and produce “Step Back,” a posthumous, star- studded affair, - pairing him on recordings with Eric Clapton, Billy Gibbons, Joe Perry, Ben Harper and many others, earning both Nelson and Winter Grammy Awards for “Best Blues Album”. Nelson still feels the loss of his friend and mentor. But he also recognizes that new creative endeavors are ahead.

Nelson received a Grammy award for his work performing on and producing Winter's “Step Back” release on Megaforce/Sony winning “Best Blues Album of the Year” highlighting his already long list of Grammy Nominations. As well as the BMA “Blues Music Award” for “Best Blues/Rock Album” reaching #16 on the Billboard Top 200 and staying at #1 on the Billboard Blues Charts for weeks. He is also a recipient of the Blues Foundation's KBA “Keeping The Blues Alive Award”.

Staying at #1 on the “Hot New Releases” charts for months Nelson's latest project “Badass Generation" on Sony Records still maintains his unmistakable connection to the Blues, but it also finds the guitarist showing his many other musical dimentions fans have come expect considering him one of music's most respected and influential contemporary artists.

The formation of The Paul Nelson Band and new self-titled album marks the next step in that evolution. Nelson's latest project still maintains an unmistakable connection to the blues, but it also finds the guitarist showing his other musical dimensions, from hard-edged, uncompromising rock and blues to acoustic-driven singer-songwriter fare.

“The Paul Nelson Band rocks. Period. Nelson's sparkling electricity spills out of his guitar like Blues/Rock on Steroids. Singer Morten Fredheim is a find! Paul Rodgers ain't got nothin’ on this guy! Nelson is razor-sharp, crystal-clear and punctuates the proceedings with a kick and a grin. This band can’t help but be huge.” - Goldmine Magazine

On this album Nelson and his newly formed band skillfully incorporate an array of sounds and styles, with what Nelson's fans know to be his calling card: remarkable, world-class virtuosity on the guitar - what you might expect of someone who was also taught by six-string master Steve Vai. “This project has so much input from all of the different styles of music that have influenced me and my band, from blues to classic rock to jam band, pop rock and more. I wanted to play the guitar to serve the songs – and not the other way around. Everything I create has to fit in with the music,” says Nelson.