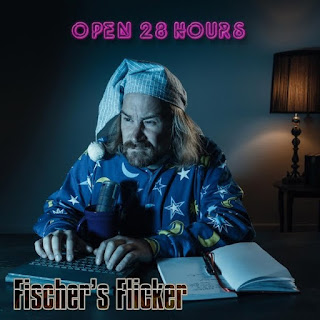 Chicago - The musical mind of native Chicagoan Scott Fischer has been described as a colorfully symphonic amusement park. Whether it's a song-length concept piece, a full album, a rock opera or something else entirely, big bright melodies and ambitious composition always take center stage. As a contributor to Zappacast (the official Frank Zappa podcast), a performer in The Rod Stewart Experience with the legendary Carmine Appice and now on his seventh album, it's no wonder this latest release is titled “Open 28 Hours”: Whatever you're expecting from Fischer's Flicker, you're going to end up with more.

“Open 28 Hours” revisits the humor and camp of Fischer's previous musical bodies of work, and also maintains a musically mature songwriting style and Fischer's signature elastic vocals. Part prog, part power pop, part funk, part piano magic, part 80's extravagance and all at once endlessly intriguing, “Open 28 Hours” plays like a diverse mixtape from another planet. Diversity is not only this band's strong suit, but its card to play in an industry where singular genres seemingly come hardwired in these days. Instead, Fischer's Flicker has something for everyone without kowtowing to trends or passing whims. Good songs are universal, and this is a record that's full of them.

Anchored by odd time signatures filled with sweeping arpeggios played in unison, “Spiders” still could find a home on rock radio thanks to its harmonious structure, while the obscure Kinks cover “No More Looking Back” honors its muse in keen Fischer-esque fashion. Album starter “The In-Betweener” rides high on a soul-rock groove, and although closing number “Zen” is far and away the album's most serene track, it does so in a way that still packs a punch.

Lyrically, relationships play a huge part in Fischer's storytelling, whether it's the acceptation of a fraught back-and-forth, a realization of being a victim to circumstance or an urge to run and hide, Fischer puts all on display in a way that's both vulnerable and brave. Mid-album cut “Smoke Signals,” Fischer's most autobiographical tune in the bunch, comes from an awakening that “no matter how many times in your life that you feel things have finally settled down or that have achieved some type of state of consistency, and then see just how many people have passed in and out of your life,” he states. “You wonder which of your friends will betray you further down the road. You wonder if someone is there to help you or hinder you or take advantage. And then the realization is that it's OK to have change. That starting over allows you the chance to learn from mistakes and create new memories.”

This is all without mentioning the nearly 10-minute epic “Mother of a Ship,” where an existential crises leads to a chance meeting with an alien who offers the protagonist all he can dream of in exchange for fellow humans who are taking up space. It's a premise that leads to discussion and questions on the listener's end, sprawled over a blissful, enormously enjoyable funk/prog backdrop.

Granted, Fischer's ideas are big and the delivery is equally so, but the ideas presented are mainly about the little things we can all do to stay happy (or at least, retreat from the darkness). More so than the length of time given, the first word in the album's title is key: These songs are open, in every sense. Taking it all in, like any great piece of art, is a process and if given the time, this seventh album pays off for the listener in spades.