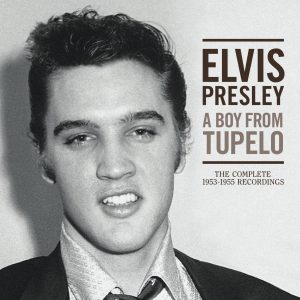 The recordings of Elvis Presley remain as pertinent today as they always have. In fact, it is likely with each passing year that their importance goes up one more notch. His position in rock music goes without saying and there are still many new fans to gain. The release of these informative box sets has shed new light on one of our greatest performers.

This rootsy original music is the second version of a A Boy From Tupelo-The Complete 1953-1955 Recordings.  The three CDs and booklet capitalizes on his never-ending popularity.

This set puts together all the known existing Elvis Presley recordings from 1953 through 1955. A massive total of 53 studio takes and 32 live performances are included. These were the Sun Years and there is even cuts the man paid for himself. At this point that sounds ludicrous but we must remember he had humble beginnings as most artists did when they first started. The priceless masters released for Sam Phillips on his iconic Memphis label feature a treasure trove of outtakes and acetates. This set can claim rights to the “complete” set of that period. It was a monumental achievement to get all this music together and remaster it. Some parts are snippets put together piece by piece.

Something needs to be said for the generous book that is included with many rare pictures. It is the story behind the music. If you enjoy reading about the history of this legend then this will be a big plus while you are listening. The 119 pages come packed with notes on the beginnings of Elvis and his early career.

The most enjoyable thing for my ears was listening to the influence of country and blues intersecting with his quickly developing style and voice. It is simplistic music at times, yet his full-bodied vocals served as a separate instrument. His contributions were just enough to really appreciate all the instrumentation as well. You have to keep in mind that recording was in its infancy in comparison to today’s high-tech tools and enhancements. His voice was very mature so early on and you could hear how and why he was a shooting star once his music hit the streets. He went from a little boy watching the choir at church and trying to sing with them to an international super star in matter of years. Stories like Elvis are not something you hear these days and honestly there are not performers like him around anymore nor anyone to challenge his continuing popularity and legacy. I am still waiting for that day to arrive although realistically I am not very confident it will.

There is a lot of music and information to absorb in A Boy From Tupelo-The Complete 1953-1955 Recordings.  It is well worth the price tag if you are Elvis fan or a general music fan curious about the early career of such a legendary performer. If you listen to the popular genre of Roots Music you will hear how some of that music started on this set. He laid down the foundation for so much as so many artists that came after him. Elvis set many precedents and this music was a real treat when I first heard it. It can be very special if you are already familiar with his catalog and diverse career path in recording. Either way, there is a lot to enjoy here for any music fan or history buff.

Review Provided By Write A Music Review
By Keith "MuzikMan" Hannaleck at August 06, 2017