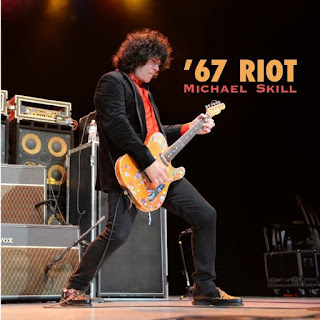 Detroit - From the man who crafted such hit singles as “What I Like About You,” “Talking in Your Sleep,” and “One In A Million,” comes a new gritty blues-rock single about the riots that forever changed his hometown of Detroit in 1967. Michael Skill, who has played both bass and guitar for the power-pop rock 'n' roll band The Romantics, was a budding teenager in 1967 when five days of racially charged riots tore apart Detroit in July. When it was over, 43 people lay dead, 1,189 had been injured, more than 7,200 had been arrested and more than 2,000 buildings had been destroyed.

Skill lived on Detroit's East Side and says that although the violence took place several miles from his home, he nonetheless saw its effects up close. “I remember the National Guard right down the street from my house,” he says. “People watching the riots on TV were afraid that rioters would come into our neighborhood. People were freaked out.” The riots changed his beloved Motor City forever. “A lot of my friends' families took off for the suburbs after that,” he says, noting his family chose to stay in the city.

The riot's effects – and the fact that many of the issues they raised, from police brutality to economic decay – stayed with Skill, culminating in his desire to write “67 Riot.” Loud, powerful and evocative of tough tunes by such rockers as Link Wray, Jimi Hendrix and Skill's fellow Detroit rockers, The MC 5, “67 Riot” is both a haunting look at the past as well as a timely allusion to the present, in a world where racial and social tension still threaten to rend our nation in two.

“I wrote the song from a sense of frustration that people never came together after the riots to really address what happened, to look each other in the eye and say, 'How can we repair this? How can we move forward?'” The song's lyrics are written from this point of view. “4 AM/Down the street/Cops roll in/With all the heat/Blind pig roaring/Kickin' their heels/Soldiers home/Just gettin' real,” the song opens. “Rooftop sniper/Set the sight/Burning cocktails/Flash in flight/Broken city/Broken dreams/Things aren't always what they seem/67 Riot!”

Recorded in Skill's own studio, the song features him on guitar, bass and vocals, and also features drummer Russell Ayers, who engineered the tune. The co-producers sought to create an aural equivalent of what it was like to live through this violent time, Skill says, but he adds that he wanted the song to end on a note of hope because Detroit has rebounded in recent years.

“Try to warm your heart/Dream your dreams/Break the chain/Let's start clean,” he adds in his song, noting it’s time to break the chain of racism that has shackled generations before, during and after “67 Riot.”

The Romantics are still touring, still recording and currently feature 3 original band members on the front line up, Rich Cole, Wally Palmar and co-founder Michael Skill. Drummer Brad Elvis joined The Romantics in 2004 and has been the longest seated drummer with the band. Rich Cole rejoined the band in 2010, reviving the band's 3-part harmony allowing The Romantics to perform songs from their first two albums live for the first time since his departure.