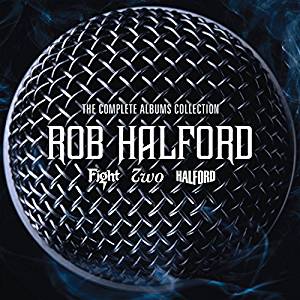 Rob Halford is The Heavy Metal God. I don’t think too many people would dispute that claim. Although there are a few others like Ozzy that can stake claim to that title however he is the self-proclaimed prince of darkness. Halford has made his mark with the legendary band Judas Priest and he did have a remarkable solo career for several years. He is on his second long term stint as their front man and doing very well indeed.

I never got into his band Fight before and this was a great opportunity to do so. I really enjoyed the four recordings that are part of this box set. Even the K5: The War of Words Demos were good. And as far as demos go I would have to say excellent.

Halford put together a young and energetic band that really knew how to bring down the house. All you need is a good band and Halford fronting it, and you the perfect recipe for heavy metal mayhem.

When Resurrection and Crucible came out I remember being very anxious to hear them. I was wondering without Judas Priest if the man would lose his core sound and command in songs. Well that thought was dispelled quickly as those two releases cemented his solo career once and for all. We are all glad he went back to Priest but he did carve out an excellent solo career. It’s all about talent and chemistry and those two elements blended well on those excellent releases.

Live Insurrection is one of the better live albums I have ever heard. For my metal tastes, it ranks right up there with Deep Purple’s Made In Japan and Uriah Heep Live, both 70s classics that I played all the time. The only qualm I have with this box set is the inclusion of two other live albums, which are good but they don’t touch Live Insurrection. I really don’t think there was a need to have three live albums in one box set. More rarities would have been appropriate for this type of career spanning release.

Two was an experiment and it doesn’t sound like it belongs in this set at all but it was one of Halford’s solo projects. Halford III: Winter Songs was a novelty and now he can say he did a Christmas album. I thought it was a waste of time when he released it and it is the one blemish on his otherwise incredible career. Halford IV: Made of Metal would get him back on track again although it was not one of his best it was a good listen. He reclaimed his title as the heavy metal god once again and moved on to make some incredible music with Judas Priest (and they are working one another album presently).

So, take away two live albums and the Christmas album and what you have is various shades and levels of heavy metal music with one of the best voices in the history of the genre. Those three releases could have been replaced easily for us hungry metal fans with other recordings in the vaults. Perhaps that will be for another day though.

When you hear the scream like a banshee on “Resurrection” you know there is nobody that did it like Rob Halford. So just crank it up and enjoy. I started every day off for a week listening to this music on my morning drive. Metal and a cup of joe always set me right.

Check out the amazing solo career of Mr. Rob Halford. His work with Judas Priest continues to be excellent and what he did on his own certainly made a statement as well. He can hang his head high knowing his music represented Heavy Metal in the best way possible.