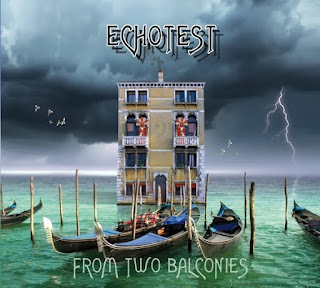 Philadelphia - Bassists Julie Slick (Adrian Belew Power Trio, Crimson ProjeKct) and Marco Machera are proudly presenting a new EchoTest album, exploring new heights in this bassist collaboration with their third release: “From Two Balconies”. Displaying an even higher production value, a new member (drummer Alessandro Inolti), many more guests (Pat Mastelotto, Tim Motzer, Ali Wadsworth, Ian Gray, Greg Rosen, and Sarah Anderson), the record is a departure from the heavily instrumental and bass-dominated “Fourth Dementia” (2014) and “Le Fil Rouge” (2015). It features lead vocals on 7 out of 10 tracks - Marco takes this role on a few songs, but he also shares this job with Mike Visser (Imaginary Tricks) and Claire Wadsworth. The result is a modern-sounding, yet classic record that defies genres, showcasing music that is truly progressive in nature. Featuring artwork by the legendary Derek Riggs.

“From two Balconies' chronicles a contemporary tragedy, the resulting resonance of characters in a tempestuous tormented limbo.” - Julie Slick

“This is not what you would expect from EchoTest after an album like 'Le Fil Rouge'. There's obviously a common thread in all of our music - but we naturally set new goals and redefine ourselves with every new effort.” - Marco Machera

Julie Slick is a virtuoso bassist and composer known for her wide array of unique tones and substantial melodic invention. Throughout her career, she has developed a distinctive voice through international performances and recording with acclaimed first class musicians in both the progressive rock and jazz communities (with the Adrian Belew Power Trio, Crimson ProjeKct, EchoTest, R_M_S, Motzer Slick Ti, PAPER CAT, and Springs).

Says Julie, “We originally had the idea to use the title after Marco explained to me the Italian expression 'Fuori come un balcone', which means 'out like a balcony' or 'you're crazy!' We tend to get in this manic, highly productive, highly hilarious place when are together, so this seemed to suit our third release... but then the album was written during a very in-limbo, purgatorial period in my life, and I actually still live nowhere, so the music has this feeling, this sense of being strewn out quite literally between two balconies.”