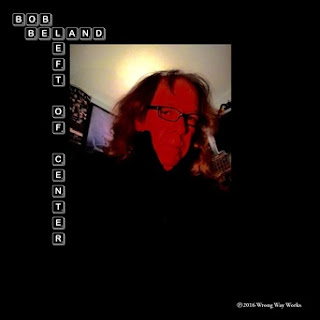 Mar Vista, CA - Much to the anticipation of music aficionados worldwide, renowned LA songwriter Bob Beland is releasing his new album “Left Of Center” on his own independent label Wrong Way Works! Beland is an American born musician/songwriter from Los Angeles, CA, where he has performed, written and recorded original music from 1973 to the present. His diverse career spans over four decades

“Left Of Center,” my new fourth solo album and the third under my own label, came as a surprise to me in 2016 as I had two complete albums of new songs already in the archives that I hadn’t released yet.

Early in the year I had just completed a long project partnering with my ex-Furys band mate, the Legendary Fontenelle DuClaw to co-write, co-perform, co-arrange and produce his first (and still unreleased) solo mini album at my home studio Wrong Way Works. Danny Simon, who mastered Fontenelle's EP, also helped me retrieve 45 song demos by my buddy Jules Shear from 1973 with 3 reels of tape that I had kept with me for over 40 years. When I went to look for those tapes again I found a few reels of my own stuff. One of those reels had the original 1983 recordings of two songs found on this new album. I ended up using one of them, “It’s Alright With Me Mr. Bob” and the other one, “Off The Handle,” I re-recorded.

“Off The Handle” was a song of mine that Fontenelle and I used to perform in the Furys back in the 80’s but I never recorded a proper version of my own until now. I'm certain that today's political climate and one unsavory character in particular inspired me to revisit it again and record it.

“It's Alright With Me Mr. Bob” was recorded with my dear friend the late David Beebe who played drums on many recordings of mine including “Stealing Cars” and “The Bob Beland E.P.” David was the drummer par excellence for Jules & the Polar Bears and Slow Children. It was always a joy to record with David and on “It's Alright With Me Mr. Bob” we had a particularly fun time recording it in a garage in Santa Monica, CA along with the help two other good friends of mine, Marty Korth on bass, and R&B singer/songwriter Dale Mitchell on vocals. All the guys were completely into accommodating my oddball idea about freedom of expression and the fun of creating that idea still seemed to exist in that recording even after 33 years and some wear and tear. Once I heard it again after Danny Simon retrieved it this year from the old tape I really felt the urge to release it flaws and all. It's a source of personal satisfaction that I wrote and recorded “It's Alright With Me Mr. Bob” 3 years before Paul Simon's African influenced album “Graceland” came out. My only regret is that David isn’t here to enjoy it again but I can close my eyes and still see him smiling, laughing and having a great time while we were putting the song together. It was always that way with David but through all the crazy fun he still delivered a great performance every single time we worked together. I still miss him and I hope he is resting in eternal peace.

“One Bright Burning” is a song I wrote way back in the 80's but never recorded until now. I came across the lyrics in my notebook and actually remembered the melody! I can't remember my username and password but I can remember a song I wrote from the 1980's. Go figure!

And of the new songs:

“Some Friends Of Mine” was originally called “Funky Folks” written on a lark for a friend who was working on a solo album with the working title of “Funky Folks.” I thought, “How the hell do you write a song called “Funky Folks?” So I did for the fun of it and sent a demo of it to my buddy who, much to my surprise, wasn’t that impressed by it (this is in spite of the fact that I reference his nick name AND his wife in the frickin' song! LOL!). Well, in spite of the rejection, I kind of liked it myself so I decided to retool and record the song with a new title so as not to encroach upon his own record. One man’s loss is another man’s gain and “Some Friends of Mine” seemed to work out for me that way and I'm happy about it for no other good reason than to have my old friend Bobby Pickett playing monster bass on the song. Bobby was Etta James bassist for many years and was an original member of Detective, the first band signed to Led Zeppelin's Swan Song label.

“Cold” features a dear old friend of mine, singer/songwriter Dan Navarro formerly of the duo Lowen & Navarro. Dan and I go all the way back to the Troubadour and the early 70's. You'd be hard pressed to find a nicer guy than the Calexico Cowboy. Dan and his partner Eric wrote and recorded many albums together throughout their prestigious 20 year career and hit it big with Pat Benatar's recording of their song, “We Belong.” Look for Dan to be releasing his first solo album very soon.

“The Lost Highway,” “It'll Take Overtime” and “Ain't Goin' Back To That” are all new songs as well. I hope you enjoy the music and performances on “Left Of Center” and thanks again for listening!

“Left Of Center” is available now as a digital download album through http://www.cdbaby.com/cd/bobbeland3 and will soon to be available at most on line music web sites such as iTunes, Amazon Music, Spotify, Tidal and others.

Bob's albums “Amnesia Lane” and “Life Begins...” are both available as downloads at iTunes
and Amazon mp3.com