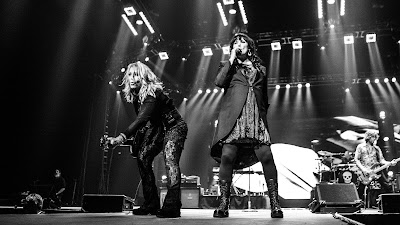 A recent evening at SPAC featured three Rock ‘n’ Roll Hall of Fame inductees on the stage. For this music lover it was a first seeing all three bands.

It was a humid and rainy evening that certainly made enjoying the show on the lawn more difficult. We felt fortunate to be under cover. We had good seats and I was grateful for that. 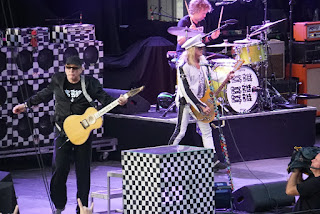 First up was Cheap Trick. Things started with an electrifying energy coming from the capacity audience as the band started with an appropriate “Hello There.” As it turned out the mix for this band was subpar and the music sounded distorted and it made hearing and understanding the vocals of Robin Zander difficult. It wasn’t until Tom Peterson stepped out and started his version of The Velvet Underground cover “I'm Waiting for the Man” with a little bit of Lou Reed’s “Heroin” sandwiched in between when things took a turn for the better.

Zander was on again and off again for most of the night in the vocal department as well. I have always enjoyed the music of Cheap Trick but they really need to get their sound mix together to present a quality show. With some tweaking of that mix they could go from a grade C to a B in a heartbeat.

Set List:
Hello There
California Man (The Move cover)
Lookout
Baby Loves to Rock
Tonight It's You
Downed
Stop This Game
I'm Waiting for the Man (The Velvet Underground cover) (Tom Peterson on lead vocals) (with 'Heroin' snippet)
The Flame
I Want You to Want Me
Dream Police
Clock Strikes Ten
Surrender
Goodnight 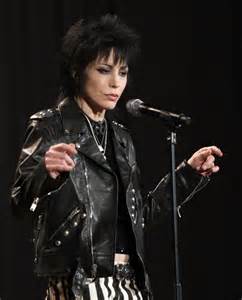 I knew once Joan Jett got on stage the energy there was going to change and I was not disappointed. It reached another level once she arrived. She kicked it off with “Bad Reputation” and all I could think of was the punk rock of the 70s like The Ramones and how she got her start with the all-female band The Runaways.

Joan sounded fantastic…as good as she always has. She still has that high energy swagger and hint of toughness in her presentation and the crowd absolutely adored her. I thought she was an exciting and charismatic performer that has obviously kept her edge after all these years. It is great to see music icons like herself still touring and presenting music in an original and quality manner. She rocks it’s as simple as that!

As Joan and her band made their way through the set the energy level and excitement level just kept rising. The sound mix was perfect, you could hear her singing as clear as day and the music was spot on all night.

I was surprised that they did not save “I Love Rock & Roll” as their closer but it still made the crowd go wild once they started in with the classic rocker. My favorites of the evening were “I Love Rock & Roll,” “I Hate Myself or Loving You” and “Cherry Bomb.” The sweet memories of youth come rushing back to you with the help of great music, it works every time.

This was a killer performance by Joan and her band and I would love to see her again. 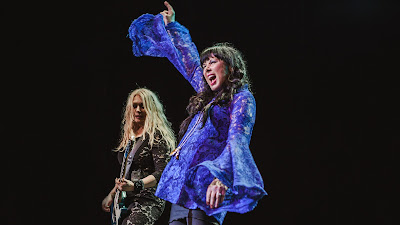 Now for the headliner, Heart. This is a band I have had interest in seeing since their inception in the 70s but never did. Finally, I got my chance to watch the legendary Wilson sisters Ann and Nancy, do their thing in a live setting.

When Ann came out on stage I noticed how great she looked. She was full of energy and excitement and that translated to the crowd instantly. Nancy has always looked the same with her long blonde hair brushing over her shoulders and her guitar in hand ready to rock.

Long time guitarist Craig Bartock was present as well and he was excellent all night long.

I thought the opening track was an interesting choice. The Romeo’s Daughter cover “Wild Child” kicked it all into high gear and it hit the bullseye, bringing everyone to their feet and setting the tone. The track reminded me of those crazy 70s I grew up in and some of things the Wilson’s experienced during that time as well. Read their biography if you are interested, it’s fascinating.

I am not only a longtime admirer of Heart but I respect Ann and Nancy for what they have accomplished on and off the stage throughout their lives. They serve as an example and inspiration to countless people across the globe.

Ann’s voice has held up amazingly over the years and she really has not taken a step back. After listening to all the new music they have recorded over the last few years and then seeing her belt out each song on stage reconfirmed that conviction. In a word, she is an amazing and electric performer that has total command of her vocals and the stage.

The musicianship was beyond reproach and it showed why they are drawing large crowds everywhere they go.

Every band has their own niche and style but Heart is special. All of these bands have been at it for over four decades. Heart sounds like they have their foot all the way to the floor when they perform. I happen to appreciate their strength and wherewithal to continue to present superb performances in and out of the studios.

“Crazy on You” was phenomenal and “Alone” was proof positive that Ann still has what it takes to grab a performance and grasp the attention of an audience. She was so powerful; I was getting chills all the way through the performance.

I think what surprised some members of the audience was the encore of the Led Zeppelin covers. I knew that they would kill it and they did. They have always acknowledged their influences and then given a positive response to that by performing certain songs superbly. I was listening to people talk on the way out of the venue and some were saying how amazed they were with their rendition of “Stairway To Heaven.” It was great to hear that people realized what a special night they witnessed. I am sure they solidified their fan base and added some younger generation folks to their followers after last night.

I would highly recommend attending this show before the tour ends, I promise you will not regret it.