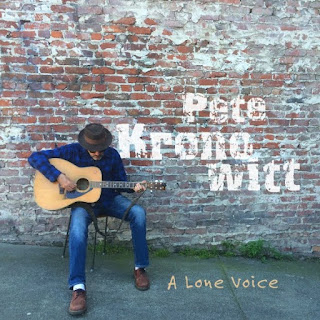 San Francisco, CA – The hunger Americans feel for change is palpable, and no artist voices this urgency better than San Francisco-based Pete Kronowitt, a seasoned singer/songwriter who is releasing his fourth full-length album, A Lone Voice. Pete’s emotive songs fuse acoustic pop and indie-folk, while evoking an era when music was made to battle injustice. A Lone Voice, releasing worldwide on July 15th, 2016, masterfully explores themes ranging from socio-political struggles to musings on the human condition. His sound is a Steve Earle-Elvis Costello hybrid, a heap of Alt-Americana influences.

The album was recorded and produced in Nashville, Tennessee by Grammy-winning songwriter Phil Madeira, with backing musicians David Mansfield on guitars, mandolin and violin, Dennis Holt on drums and percussion, Chris Donohue on bass, and of course, Phil Madeira on guitars and keys. A Lone Voice features a set of lyrical new songs spanning folk, pop, country, and acoustic-punk influences from the Ramones to Pete Seeger and John Mellencamp.

A Lone Voice stays upbeat, despite presenting some uncomfortable truths and lifting the curtain to reveal political and media manipulation. Audiences will join the chorus of the title track “Change Is Gonna Come” (inspired from Sam Cooke's iconic song) and tap to the beat of the album’s protest anthem “Got Guns?” Through his music, Kronowitt pokes fun at the absurdity of extremism and reminds us, the power of change is always here and now – within ourselves.

There are also intimate, personal moments in this collection, drawing connections between the national zeitgeist and the all-too-human emotional toll it takes on those we love. The smooth and Clapton-esque “You Are Here” reminds listeners (and Pete himself) to be present. “Holding Your Hand” is a gift for his wife after 20 years together, and the tender, album-closing “Perfect Day” is a moving tribute to his sister, who took her own life. “Tears on the Back of Her Head,” co-written with producer Phil Madeira, was written for two friends lost to cancer and their spouses, and may be the most stirring track on A Lone Voice.

Pete Kronowitt has toured internationally in China, Japan, and Vietnam, and across the U.S. in the last few years with long-time friend, collaborator, and 30-year veteran bassist John David Coppola. John, who has toured with The Danny Morris Band, was integral on Pete’s debut album Phases of the Heart. That album was recorded in 1993 at Rutabaga Studios with John Alagia, whose production credits include the Dave Matthews Band, John Mayer, and Ben Folds Five. Kronowitt’s second and third albums, Threads and elements, were produced by Pete Snell, who toured extensively with Lyle Lovett.

With an unwavering belief that together, we can raise our voices to demand common sense solutions, Pete reminds us, “The people of these great United States are bound by the many things we have in common, and we must reject any manufactured issues which are cynically created simply to divide us.” With his revolutionary new album, A Lone Voice, Pete Kronowitt has called for a rediscovery of the protest song…and not a moment too soon.

Pete Kronowitt will be performing a CD Release party and delivering his strong political messages to the Agora Theater and Ballroom in Cleveland, OH ahead of the Republican National Convention this July 18-21, 2016.

There will also be various gigs throughout 2016 in the San Francisco Bay Area and across the West Coast.

For music samples or to pre-order A Lone Voice visit: https://petekronowitt.bandcamp.com/