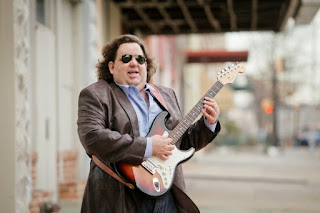 Macon, GA - On June 11th, blind guitar legend, recording artist and producer Joey Stuckey was named Jazz Artist of the Year at the 5th annual Georgia Music Awards. Never knowing how to slow down, Joey is busy working on a variety of projects including writing music with his good friends from the UK Charlie Hoskyns (The Popes), Will Morrison (Modern English) and Paul McGuiness (The Pogues).

However, currently Stuckey is most eager to share his latest music video which has been audio described for the blind.

“To the best of my knowledge, this is the first time a music video has been audio described or narrated for the blind. There have been a hand full of movies, like 'The Passion of the Christ' but, I've never heard of a music video getting the same treatment,” says Stuckey.

Audio description takes a narrator telling the story of what is happening on the screen. It is kind of like an audiobook, but in this case, it is directly relating the story being told by pictures or video in spoken word form so that the blind can also enjoy the antics and adventure of Joey and his band as he desperately tries to get to his concert. Complete with a thrilling car chase, this video is a lot of fun to watch and the blues guitar and vocal prowess of Stuckey can't be denied.

Special thanks to Delaney Holliman and Doug Diamond for the video production and friends Nash and Jenny Mayfield for writing and narrating the video.

The video and single “Blind Man Drivin'” were released last year while Joey was on tour in the UK, where the song was the official theme song for the first ever Visually Impaired Musicians' Lives Conference, which took place at the University College of London.

Check the video out at:

About Joey Stuckey:
Joey Stuckey is a chart topping and award winning blind recording artist, producer, sound engineer, educator and media personality. He is an official Gibson endorser and is also the Official Music Ambassador for his hometown of Macon, Georgia. Stuckey is a brain tumor survivor and loves to tell his story of success and overcoming adversity through his music and humor.

About Nash & Jenny Mayfield:
Nash writes in many genres and for audiences of all ages. He has just submitted his first book, a children's story entitled “4500 Steps”, for publication. Jenny Mayfield has recently launched a blog at www.nowthinkthis.com