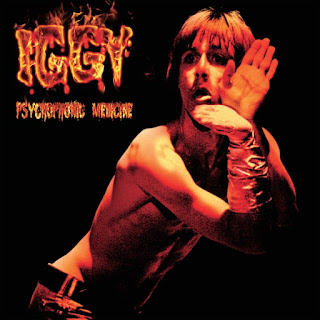 Los Angeles, CA - When Michigan based proto-punk band The Stooges called it a day in 1974, the music world mourned the loss of one of the most groundbreaking rock bands ever. Fortunately, the mourning didn’t last long as head Stooge Iggy Pop quickly launched a stunning solo career that arguably eclipsed his auspicious early years. Psychophonic Medicine is an incredible 3CD collection of rare and unreleased gems that focuses on Pop’s crucial late’70s, early ‘80s post-Stooges output. The collection, available everywhere June 23 courtesy of Cleopatra Records, features studio outtakes from the landmark albums The Idiot and Party including never before released alternate mixes and 2 tracks not previously released in any form! Each of these recordings provides important insight into how Pop evolved from punk pioneer to one of the most diverse and adventurous artists in music.

But the party doesn’t stop there - the set also contains some of Iggy’s most electrifying live performances. Disc 2 is the first ever CD release of the legendary show at Paris Palace 1979. This incredible full-length recording showcases Iggy at his most explosive and audacious, ripping through such favorites as “I Wanna Be Your Dog,” “Cock In My Pocket,” “Kill City” and more! A newly discovered audio source from Pop’s San Francisco performance in 1981 wraps up the collection in fine form with scalding versions of “I Need More,” “Lust For Life,” “TV Eye,” “1969,” “The Winter Of My Discontent” and others. Each of the three discs is packaged in its own wallet and comes with a gorgeous 36-page full color booklet featuring rare photos from the archives of longtime Stooges photographer and co-author of the only authorized Stooges biography, Robert Matheu, who also wrote the liner notes. And if that isn’t enough, the box includes a special bonus track of Iggy’s duet with Best Coast’s Bethany Cosentino that was featured on HBO’s True Blood! Both collectors and the curious will find Psychophonic Medicine an irresistible aural trip.