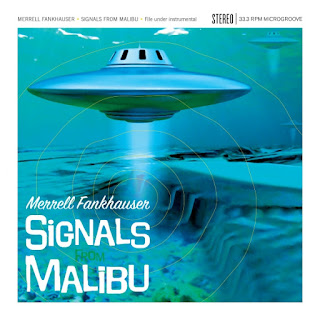 Arroyo Grande, CA - Guitar legend Merrell Fankhauser has released a new Sci-Fi symphonic instrumental surf album “Signals From Malibu” featuring strange radio signals from the underwater anomaly off the Malibu California coast. A few years back UFO buffs began investigating some strange electronic signals that appeared to be emanating from a spot deep beneath the Pacific Ocean off the Malibu coast. They reported bizarre psychic phenomena in conjunction with them, and legendary surf guitarist Merrell Fankhauser was inspired to write music based on, and including them.

Says Merrell, “The song 'Signals From Malibu' was inspired by the odd anomaly that is off the coast of Malibu California 2000 feet on the ocean floor. The area has had many sightings of UFO's diving into and coming out of the ocean. This has led many to believe it is an underwater base. An ex Army radio expert recorded some strange signals coming from the area. The signal recordings were sent to me by Michael C. Luckman director of the New York Center for Extraterrestrial Research and I incorporated them into the song. After listening more to the signals I was compelled to write a symphonic song using more of the signals titled 'Messages From The Dome'. I had the feeling the signals were communicating with me and I was inspired to keep writing the rest of the songs on this disc. If you feel tingly after listening don't worry its perfectly natural!”

Merrell Fankhauser is considered one of the main innovators of surf music and psychedelic folk rock, and is widely known as the leader of the instrumental surf group The Impacts who had the international hit “Wipeout”. He has presented a number of television programs over the years including 'California Music', 'Route 66 TV Live', and in 2001 he began hosting a music show called 'Tiki Lounge' that airs on the California Central Coast, Southern California, Hawaii and parts of the East Coast.

Watch the promotional video for “Signals From Malibu”:

To Purchase “Calling From A Star” (book):
http://www.gonzomultimedia.co.uk/product_details/15816/Merrell_Fankhauser-Calling_From_A_Star.html