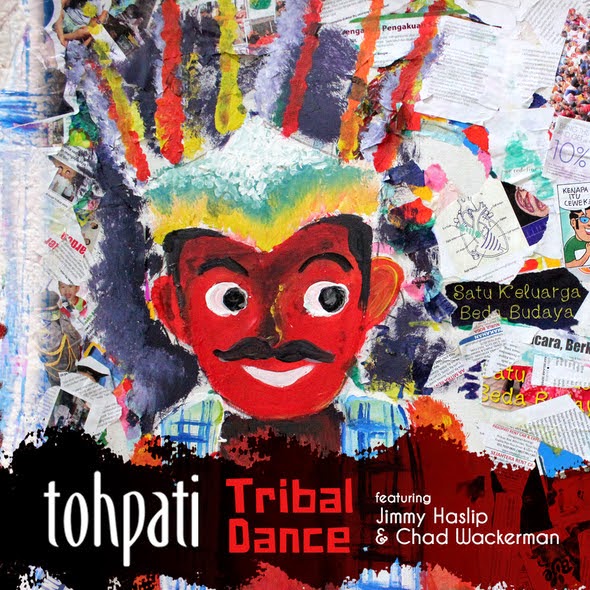 Tribal Dance' is the 11th album of Indonesian artists on MJR, and the 6th featuring Tohpati

NYC - With Tohpati’s 3rd release (2nd as a trio) on MoonJune, recorded in Los Angeles in September 2013, we see the Beckian progressive metal riffing of 2012’s Tohpati Bertiga 'Riot' supplanted by a pairing of compositional dexterity along with the unique guitar voice that is the essence of Tohpati, one of Indonesia's most famous guitar players. Though there is no shortage of acrobatic axe-wielding on 'Tribal Dance', Tohpati’s democratic interplay with the formidable world class rhythm section of Jimmy Haslip and Chad Wackerman is the real star here – creating a powerful synergy that gives voice to the whole of the music over its parts and delivering a richly rewarding listening experience. Power chords, distorted spare note leads, chugging rhythmic grooves and nuanced jazz phrasings are all summoned up by Tohpati, as he locks in with Haslip’s dubmaster basslines and the rubber-limbed kitwork of Wackerman, creating tracks of infectious syncopation and of sufficient complexity to warrant a player recount. Aside from a few ambient vocal samples, 'Tribal Dance' is an instrumental album, though many of Tohpati’s melodic guitar lead lines feel “sung” in both song context and in the expressive way in which they are played. This diversity of guitar voicings and textures, along with the enthusiasm and chemistry between the players, will keep this disc in heavy rotation. Fans of Jeff Beck, Wayne Krantz, Allan Holdsworth, Scott Henderson, Oz Noy, and, of course, the Indonesian guitar icon Dewa Budjana, will surely want to pick this up.

“Indonesian guitarist Tohpati Bertiga spews lightning strikes across the studio, enamored by his slick-picking breakouts and shrewd use of space. He's a seasoned vet, noted by his prominent session duties and affiliation with the ultra-progressive jazz-rock band simakDialog, and his own Tohpati Bertiga power trio and Tohpati Ethnomission.” - All About Jazz

“One of the world's greatest and most versatile guitarists of the XXI Century.” - Leonardo Pavkovic, MoonJune

“Tohpati has matured into a singular voice on his instrument as well as a composer of uncommon breadth and skill.” - Grande Rock (Greece)

“Tohpati is at the forefront of modern magicians of electric guitar.” - WIld Thing Magazine (Greece)

“Tohpati certainly knows his chops, but his playing shows a depth of feeling as well as heaps of technical ability.” – Astounded By Sound (USA)

“Tohpati is an outstanding guitarist and it's refreshing to hear a guitarist with his own voice - while he's often playing lines that are technically difficult, they never sound much like what we normally hear from a hot guitarist.” - Exposé Magazine (USA)

“Tohpati can be as fluid as Holdsworth when he wishes, playing with the mastery the progressive fusion in it's truest sense.” - Jazz Music Archive (USA)