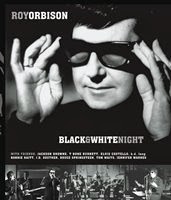 Release Date: November 11, 2013
Label: Sony
Website
Roy Orbison was a legendary performer that had one of the most recognizable and beautiful falsetto operatic voices that ever graced a studio or concert hall. Whatever descriptive term you may have heard about the man…legendary, iconic, brilliant, rare talent, whatever superlative you can possibly imagine that gave credence to the legend of this man’s talent, in this light they all would be a fit. He was a gentle unassuming soul that endured horrible tragedies with his family. Losing a wife in a car accident and then two sons in a fire would have destroyed most people. Even with all that pain and sorrow to deal with, this man somehow found acceptance and peace and continued to make music.

In 1988 Orbison gathered an impressive group of musicians to air a TV special called Black & White Night. This reissued DVD captures that event and fans are once again reminded of how special Orbison was and how that night was so historic for music. The people involved will most certainly remember it forever as well as those in the audience. I have watched this concert countless times and it has aired on PBS several times as well. When you hear Orbison cover powerful classics like “Oh, Pretty Woman,” “It's Over,” and “Only The Lonely” you become mesmerized by his voice and magnetism on stage.

The album was released in February 1989 a year after the performance was aired on TV and it has left an indelible mark on the music industry and fans alike. I think what is so prolific and striking about the video is that this was filmed in black and white. If you stop and listen to Orbison’s songs they are very much black and white, there were no hidden meanings. His music was catchy rock-pop songs about love and life itself. He perfected the pop hit in the 50s and carried it into three more decades before his passing.

Some celebrity admirers of Orbison that were in the audience that night included - Billy Idol, Patrick Swayze, Sandra Bernhard, and Kris Kristofferson. The backing band was the TCB Band, which accompanied Elvis Presley from 1969 until his death in 1977. The male background vocalists, some of whom also joined in on guitar with Roy, were significant such as Bruce Springsteen, Tom Waits, Elvis Costello, Jackson Browne, J.D. Souther, and Steven Soles. The female background vocalists were also a star studded group which included K.D. Lang, Jennifer Warnes, Cindy Bullens and Bonnie Raitt.

This DVD is tremendous and Orbison was in top form and well on his way to making a lasting comeback but that was not written in the stars for him, he was gone suddenly but he left behind an unmatched legacy of recorded works. He was a beautiful soul with the voice of an angel and releases like this reaffirm that truth every time you watch and listen to them.
5/5 Stars

Key Tracks: Oh, Pretty Woman, It's Over, Only The Lonely

Tracks:
Only The Lonely
Dream Baby (How Long Must I Dream)
Blue Bayou
The Comedians
Ooby Dooby
Leah
Running Scared
Uptown
In Dreams
Crying
Candy Man
Go Go Go (Down the Line)
Mean Woman Blues
(All I Can Do is) Dream You
Claudette
It's Over
Oh, Pretty Woman

Review Provided By Write A Music Review
By Keith "MuzikMan" Hannaleck at February 01, 2014